skip to main | skip to sidebar


There was a time when collect phone calls (particularly from people who were at pay phones and did not have a lot of coins) were quite common.

With the ubiquity of cellphones, both pay phones and collect calling are fading fast.

There are many teenagers who have never used either -- but collect calls can still be made, at a very high price. Most collect calls are probably made from prison.

Pat Devine of Toluca Lake, California assumed that her collect-call days were behind her. Like most people, she carries a cellphone.

But when she was running late for a beauty salon appointment, Devine realized that her cellphone battery had died. She didn't want to be rude and leave her hairstylist waiting. So she looked around for a pay phone.

It was hard to find one. Most of the big phone companies have gotten out of the pay phone business.

There are now about 700,000 pay phones in operation nationwide, compared with nearly 277 million wireless subscribers. Most pay phones are owned by local businesses, such as gas stations.

Devine finally found a phone but it ate up all of her quarters without completing a call. Desparate, Devine pressed zero and was connected to an operator. Devine said she'd like to make a collect call and provided the number.

Barbara James runs the Fandango Salon in Silver Lake. She said that when Devine's collect call came in, a salon employee didn't hesitate to accept the charges.

There was no indication from the operator that this would be an expensive call. Devine was calling from only about a mile away and the call lasted roughly three minutes.

When the salon's AT&T bill arrived, it included a charge for $45.09 from Network Communications International Corp., a Texas company that says it's the largest privately held provider of collect-call services for pay phones, prisons, hospitals and hotels.

Pay phones were deregulated in 1996.

AT&T says it might charge two cents per minute for a local call made from about a mile away, albeit without an operator.

An NCIC customer-service supervisor said that Devine's call consisted of a nearly $25 "connection charge" and a rate of about $2.50 per minute.

NCIC provides collect-call services on behalf of pay phone owners and typically kicks back more than half of the revenue to the owner.

After James got her phone bill, she called NCIC to complain and about $20 was deducted from the total.

"It's like they were expecting me to complain," James said. (info from the Los Angeles Times)
Posted by Michael N. Marcus at 7:20 AM No comments:

Man paid to be spit at


A main in Thousand Oaks, California was arrested for misdemeanor child annoyance after allegedly paying a teenager $31 to spit in his face.

Ventura County authorities say the man had been paying Westlake High School male students to yell profanities at him and slap and spit in his face.

Investigators say several teens also alleged the man offered them money to urinate and defecate on him. He was booked into Ventura County Jail, then released on a promise to appear in court. (info from The Associated Press)
Posted by Michael N. Marcus at 9:08 AM No comments:


A man and woman in Wichita, Kansas who told police that robbers stole their marijuana are now facing drug charges themselves. They said that five armed men came to their apartment late Monday night and took marijuana.

Police said one suspect accidentally fired his gun and spooked the other suspects. They ran from the apartment to a car, dropping marijuana along the way.

Police found more marijuana inside the apartment. The couple were booked on suspicion of various drug charges, including selling drugs within 1,000 feet of a school. (info from The Associated Press)
Posted by Michael N. Marcus at 4:13 AM No comments:

Pencil thief had $600 with him


Police in Belingham, Washington arrested a man for stealing a pencil from a store even though he was carrying $600 in cash. The man was booked into the County Jail after police learned he had an outstanding warrant for another crime.

Officers questioned the man about why he stole the mechanical pencil, worth $5.99, when he had enough money to pay for it. Police said the suspect responded: "I don't know, being stupid I guess." (info from the Associated Press)
Posted by Michael N. Marcus at 6:12 AM No comments:

Question: i have written a few books, and i am trying to get them published. i have been trying for over two years, but i haven't found anything. i want to find a publishing company that is reliable and will edit my books and work with me to get them in hard cover.

Answer: When dogs lose their hair it is normally a skin condition. You will need to converse with a vet for a skin scraping to ensure it is not a more serious condition. Long haired breeds are prone to hotspots wich cause this however, so you should not be overly concerned.

Question: i need a childrens book publisher that is in rochester ny my book is ready to be proof read and published thankk you

Answer: You can obtain a day care license through the Illinois Dept. of Children and Family Services.

Drunk woman arrested after thinking a cop was a car hop

A woman in Elizabethton, Tennessee mistook a police officer for a car hop at a drive-in, and was charged with DUI and possession of drug paraphernalia.

The incident began when someone called 911 after seeing a woman slumped over the steering wheel of a car in the parking lot of a food market. The caller then reported the woman left the parking lot, nearly striking several vehicles. The driver pulled into a parking space at the nearby Sonic Drive-In.

Elizabethton Police Officer Sarah Ellison responded to the call and approached the car. She said Veletta Newman was slumped forward with her keys in the ignition switch. When she tried to get Newman’s attention, Ellison said the woman woke up and sleepily handed her a $20 bill.

Ellison arrested Newman and during an inventory of the car Ellison reported finding a used syringe, a spoon with white powdery residue and numerous bottles of prescription medicine. (info from Johnson City Press)
Posted by Michael N. Marcus at 3:30 AM No comments:

Police said they responded to two calls from Orama and explained that this was not an emergency situation and to stop calling. Orama then called again and was cited by police and told she would be arrested if she kept calling them with nonemergencies.

Orama called 911 a few minutes later but would not say why she called. Police arrested her and took her to jail. Police said they had arrested Orama previously for repeatedly calling 911 because she couldn't find her car. (info from KOCO TV)

Someone should've known that ham is not kosher. 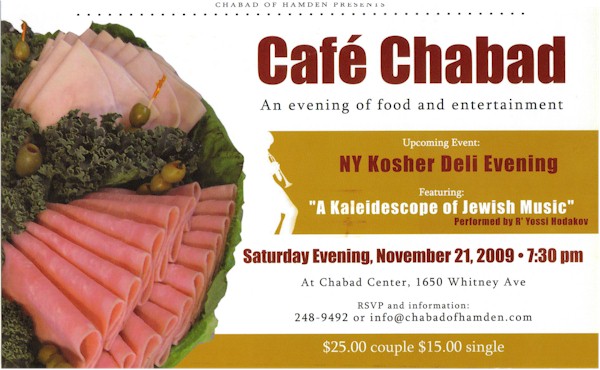 "Chabad-Lubavitch" is an Orthodox Jewish philosophy, organization and movement founded in the late 18th century. There are about 3,300 Chabad institutions worldwide, including community centers, synagogues and camps.


The Chabad Center in Hamden, Connecticut distributed the postcard shown above. It's an invitation to a "New York Kosher Deli Evening."

The turkey shown on the platter in the photograph might have beeen kosher. The ham, however, definitely was not.

This blog is written and edited by Michael N. Marcus. He's a first-year baby boomer and president of AbleComm, "the telecom department store." Michael's also a journalist, author, publisher, advertising copywriter and amateur attorney.
EMAIL ME

Become a Real Self Publisher is the online companion to my book by the same name.


BookMakingBlog is where I discuss writing, editing and publishing -- for other writers and readers.


DialZero provides a look at what's silly, stupid or surprising in telecom.

SOME OF MY BOOKS:


Become a Real Self-Publisher, for sale on Amazon.com

Stories I'd Tell My Children (but maybe not until they're adults), for sale on Amazon.com

WeLoveClams is for people who love clams

Original material is © 2009-2010, Able Online Media. All rights reserved. Some material may be copyrighted by others, and will be removed upon request by the copyright owner.